For The Uninspired Woman: We have all been through dark stages in our lives, some darker than others. I think it’s important to shed light on those who have weathered the storm. In this  two- part interview Kate shares her story with the intentions to inspire others and then next week Monday 22 the interview will commence.

Warning may be triggering 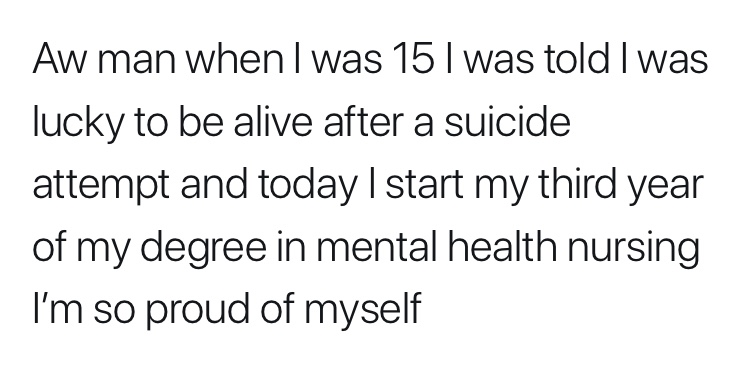 “I’d started to struggle with my mental health when I was about 12 or 13. I’d had a fairly turbulent childhood and was getting to the age where I was starting to process everything that had gone on and how it had taken a toll on me. I’d also started to get bullied by this time, which was the reason I started self harming. I started because it temporarily distracted me from what was going on in my life, even though it done nothing to change that. I’d lost the majority of my friends both in and out of school, my academic performance dropped dramatically and my relationship with my family became extremely strained. It effected my whole life.

I’d been in adult counseling services but wasn’t finding that it was helping me much, as I felt misunderstood due to my age. When I had just turned 15, I reached my breaking point. One day after school I went to the bathroom and attempted to commit suicide by slitting my wrists. I went into an immediate panic as I realised the weight of my actions. My mam saw what I’d done and brought me to A&E where I was seen immediately. This trip was a harrowing experience for me due to the attitudes I’d faced from staff.

The first nurse I’d met who examined me and controlled the bleeding told me I was selfish for taking up a hospital bed when there was plenty of other sick children waiting on one. The next comment was made by a doctor who mocked me for my fear of needles, telling me that there was no way I could have a fear of needles if I had the capacity to attempt suicide. I was stabilised and seen by a psychiatrist, where I lied about my mental state and my intentions to hurt myself. I knew I needed help, but after the experience I’d had with the staff in the hospital I was determined to do and say anything I could to get out of that hospital. As a result, I was discharged and sent home. I attended counseling on and off for the next 2 years and eventually got to a point of stability.

When I was in my final year of school I started to explore courses and one that caught my eye was mental health nursing. I’d always had a passion to go into nursing and help others and I thought back to my experiences in hospital, and thought that if I could prevent one other person from sharing that experience that I’d feel like I’d fulfilled my duty. So I studied really hard and got into the course. I’m now 20 years old and in my third year, I will be graduating in 2021

The course is tough to say the least, but it is such an honor to be able to help people going through what I went through. Not to mention I’ve met some amazing people and made lifelong friends in my course, many of whom share similar experiences with me. Things aren’t perfect, I still continue to struggle with my mental health, but reflecting on how far I’ve come and hearing people tell me how I’ve helped them always gives me the push to keep going!”

0 comments on “Attempting to end my life, changed my life.”